Democratic Primary: We Have a Winner

"North Carolina will be a game changer"

Fritz Wenzel of Zogby International tells Newsmax that Zogby's polling data shows the Democratic presidential nomination is now a lock for Barack Obama. He explains what Hillary Clinton needed to do was to win convincingly in Indiana and keep it relatively close in North Carolina. She failed to do either. He predicts many superdelegates will come out in the next few days and publicly announce their support for Obama.

Update: **DRUDGE EXCLUSIVE 8:59 EM ET**: Senator Clinton has made another multi-million dollar loan to her campaign. She gave $6.4M in the past month and will be giving more... Developing... Mrs. Clinton plods on, but all hope of her winning has been mathematically put to rest. It is all over but the shouting. Look for the nominees to complete the primary schedule, with Obama going over the top on May 20.

Congratulations America! You FINALLY got it right. 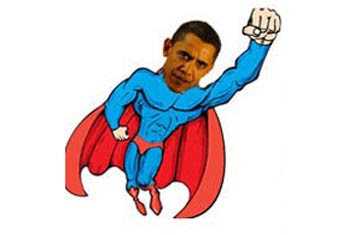 NBC: Russert repeated his Obama-is-the-nominee line, but hung it on “objective Democrats” rather than his own judgment. Of insiders, said “the obstacles are overwhelming, and they know it.” Russert suggested Obama would help Clinton retire her campaign debt (and pay off Mark Penn’s bills) as part of an exit deal.

Andrea Mitchell: “She is ready to give up.” Cited Ed Rendell as the kind of supporter who might ease her out.

ABC: Stephanopoulos said despite the race going on “this nomination fight is over,” Obama’s lead “can’t be overcome” in elected delegates. Says she’s depending on Oregon, seating full delegations of Michigan, Florida and a “revelation” on the scale of another Rev. Wright controversy to see any sort of comeback.

CBS: Schieffer said the race is “basically” over, question is whether this “demolition derby” continues where they are fighting each other. Suggested dream ticket as a solution. Said she’s meeting with advisers Wednesday, there will be increased pressure on her to drop out.

Clinton strategist/spokesman Howard Wolfson on MSNBC’s “Morning Joe” tried to spin Indiana win as “impressive” because she was outspent, said “no question” they have to have a good month. Want to make sure Florida, Michigan are counted, he has “no sense” she’s interested in Veep slot.