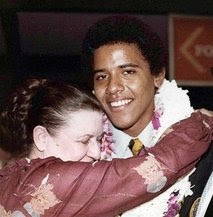 HONOLULU – Barack Obama's grandmother, whose personality and bearing shaped much of the life of the Democratic presidential contender, has died, Obama announced Monday, one day before the election. Madelyn Payne Dunham was 86. Obama announced the news from the campaign trail in Charlotte, N.C. The joint statement with his sister Maya Soetoro-Ng said Dunham died peacefully late Sunday night after a battle with cancer.

They said: "She was the cornerstone of our family, and a woman of extraordinary accomplishment, strength, and humility. She was the person who encouraged and allowed us to take chances."

Obama learned of her death Monday morning while he was campaigning in Jacksonville, Fla. He planned to go ahead with campaign appearances.

The family said a private ceremony would be held later.

Last month, Obama took a break from campaigning and flew to Hawaii to be with Dunham as her health declined.

Obama said the decision to go to Hawaii was easy to make, telling CBS that he "got there too late" when his mother died of ovarian cancer in 1995 at 53, and wanted to make sure "that I don't make the same mistake twice."

The Kansas-born Dunham and her husband, Stanley, raised their grandson for several years so he could attend school in Honolulu while their daughter and her second husband lived overseas. Her influence on Obama's manner and the way he viewed the world was substantial, the candidate himself told millions watching him accept his party's nomination in Denver in August.

Obama's nickname for his grandmother was "Toot," a version of the Hawaiian word for grandmother, tutu. Many of his speeches describe her working on a bomber assembly line during World War II.