My Holiday with John McCain - A True Story 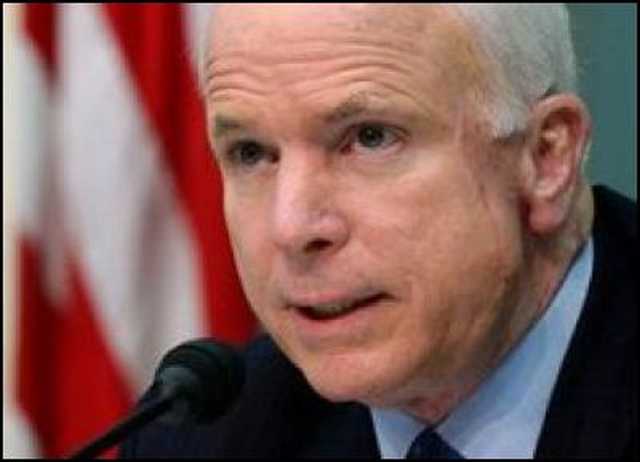 A Note from Kate

(Note from Kate: This shocking account was written by Ana Dubey, a friend of my cousin and her husband, who have known Ana for many years. Ana has a PhD in psychology and has a private practice in San Francisco. My cousin's husband went to business school with Ana's husband, who has since started and sold a number of successful companies. Ana's husband is currently a Managing Director of a private equity firm in the Bay Area. Ana and her husband are not political activists and don't have any personal ax to grind. In fact, in writing this account of her experience with John McCain, Ana is acting outside of her own economic self-interest as she and her husband are among the top 3-5% of our population who would benefit from the McCain tax/economic policies. Please pass this on to anyone you know who might vote for John McCain. Also please post it on blogs and send it to newspapers and radio stations.)

MY HOLIDAY WITH JOHN McCAIN
It was just before John McCain's last run at the presidential nomination in 2000 that my husband and I vacationed in Turtle Island in Fiji with John McCain, Cindy, and their children,
including Bridget (their adopted Bangladeshi child). It was not our intention, but it was our misfortune to be in close quarters with John McCain for almost a week, since Turtle Island has a small number of bungalows and their focus on communal meals force all vacationers who are there at the same time to get to know each other intimately. He arrived at our first group meal and started reading quotes from a pile of William Faulkner books with a forest of Post-Its sticking out of them. I soon realized that McCain actually thought we had come on vacation to be a volunteer audience for his "readings" which then became a regular part of each meal. Out of politeness, none of the vacationers initially protested at this intrusion into their blissful holiday, but people's buttons definitely got pushed as the readings continued day after day.

Unfortunately this was not his only contribution to our mealtime entertainment. He waxed on during one meal about how Indo-Chinese women had the best figures and that our American corn-fed women just couldn't meet up to this standard. He also made it a point that all of us should stop Cindy from having dessert as her weight was too high and made a few comments to Amy, the 25 year old wife of the honeymooning couple from Nebraska that she should eat less as she needed to lose weight. McCain's appreciation of the beauty of Asian women was so great that David the American economist had to move his Thai wife to the other side of the table from McCain as McCain kept aggressively flirting with and touching her.

Needless to say I was irritated at his large ego and his rude behavior towards his wife and other women, but decided he must have some redeeming qualities as he had adopted a handicapped child from Bangladesh. I asked him about this one day, and his response was shocking: "Oh, that was Cindy's idea I didn't have anything to do with it. She just went and adopted this thing without even asking me. You can't imagine how people stare when I wheel this ugly, black thing around in a shopping cart in Arizona. No, it wasn't my idea at all."

I actively avoided McCain after that, but unfortunately one day he engaged me in a political discussion which soon got us on the topic of the active US bombing of Iraq at that time. I was shocked when he said, "If I was in charge, I would nuke Iraq to teach them a lesson." Given McCain's personal experience with the horrors of war, I had expected a more balanced point of view. I commented on the tragic consequences of the nuclear attacks on Japan during WWII - but no, he was not to be dissuaded. He went on to say that if it was up to him he would have dropped many more nuclear bombs on Japan. I rapidly extricated myself from this conversation as I could tell that his experience being tortured as a POW didn't seem to have mellowed out his perspective, but rather had made him more aggressive and vengeful towards the world.

My final encounter with McCain was on the morning that he was leaving Turtle Island. Amy and I were happily eating pancakes when McCain arrived and told Amy that she shouldn't be having pancakes because she needed to lose weight. Amy burst into tears at this abusive comment. I felt fiercely protective of Amy and immediately turned to McCain and told him to leave her alone. He became very angry and abusive towards me, and said, "Don't you know who I am?" I looked him in the face and said, "Yes, you are the biggest asshole I have ever met," and headed back to my cabin. I am happy to say that later that day when I arrived at lunch I was given a standing ovation by all the guests for having stood up to McCain's bullying.

Although I have shared my McCain story informally with friends, this is the first time I am making this public. I almost did so in 2000, when McCain first announced his bid for the Republican nomination, but it soon became apparent that George Bush was the shoo-in candidate and so I did not act then. However, now that there is a very real possibility that
McCain could be elected as our next president, I feel it is my duty as an American citizen to share this story. I can't imagine a more scary outcome for America than that this abusive, aggressive man should lead our nation. I have observed him in intimate surroundings as he really is, not how the media portrays him to be. If his attitudes toward women and his treatment of his own family are even a small indicator of his real personality, then I shudder to think what will happen to America were he to be elected as our President.


NOTE FROM THE CANDID BLOGGER: Thank you, Ms. Gamel for your contribution to America.