CLINTON - WRIGHT TEAM UP AGAINST OBAMA 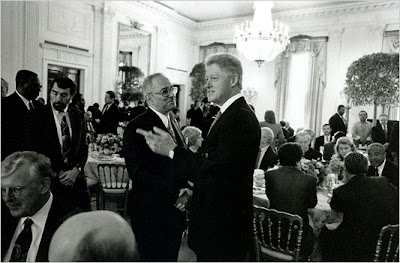 Bill Clinton and Reverend Wright at White House in 1998
Mr. Wright was invited to the 1998 prayer breakfast at the White House after Bill Clinton's lies about his relationship with Monica Lewinsky had been exposed. He received a thank-you note from former President Clinton for his expressions of support about six weeks later.

Thank you so much for your kind message.
I am touched by your prayers and by the many expressions of encouragement and support I have received from friends across our country.

You have my best wishes.

The Rev. Jeremiah Wright couldn't have done more damage to Barack Obama's campaign if he had tried. And you have to wonder if that's just what one friend of Wright wanted. Shortly before he rose to deliver his rambling, angry, sarcastic remarks at the National Press Club Monday, Wright sat next to, and chatted with, Barbara Reynolds.

A former editorial board member at USA Today, she runs something called Reynolds News Services and teaches ministry at the Howard University School of Divinity. (She is an ordained minister).

It also turns out that Reynolds - introduced Monday as a member of the National Press Club "who organized" the event - is an enthusiastic Hillary Clinton supporter.

On a blog linked to her Web site- www.reynoldsnews.com- Reynolds said in a February post: "My vote for Hillary in the Maryland primary was my way of saying thank you" to Clinton and her husband for the successes of Bill Clinton's presidency.

The same post criticized Obama's "Audacity of Hope" theme: "Hope by definition is not based on facts," wrote Reynolds. It is an emotional expectation. Things hoped for may or may not come. But help based on experience trumps hope every time."

In another blog entry, Reynolds gives an ever-sharper critique of Obama: "It is a sad testimony that to protect his credentials as a unifier above the fray, the senator is fueling the media characterization that Rev. Dr. Wright is some retiring old uncle in the church basement."

I don't know if Reynolds' eagerness to help Wright stage a disastrous news conference with the national media was a way of trying to help Clinton - my queries to Reynolds by phone and e-mail weren't returned yesterday - but it's safe to say she didn't see any conflict between promoting Wright and supporting Clinton.

It's hard to exaggerate how bad the actual news conference was. Wright, steeped in an honorable, fiery tradition of Bible-based social criticism, cheapened his arguments and his movement by mugging for the cameras, rolling his eyes, heaping scorn on his critics and acting as if nobody in the room was learned enough to ask him a question.

Wright has, unquestionably, been caricatured and vilified unfairly. The feeding programs, prison outreach and other social services he has built over more than 30 years are commendable, and his reading of the Judeo-Christian tradition as an epic story of people trying to escape slavery is far more right than wrong - and not something to be caricatured or compressed into a 10-second sound bite.

But Wright should have known - and his friend and ally Reynolds, a media professional, surely knew - that bickering with the press can only harm Wright and, by extension, Obama.

I hope that wasn't their goal.

Hillary Clinton's campaign is hanging on by a thread. Her "kitchen sink" strategy is truly representative of the old-style politics that Senator Obama is trying so desperately to change. Now it appears that she is using Reverend Wright's obvious jealousy of Senator Obama's rise to popularity as a weapon against Senator Obama in her never-ending cesspool of tricks. The resort to racism in this race has been a very carefully planned strategy by the Clintons and shows just how low politics has sunk in this country. Let's hope for the good of democracy that dirty tricks and media manipulation are insufficient to stop a true movement of the people.

Let's rise up America, especially the voters of Indiana and North Carolina, and NOT BE FOOLED by this disgusting attack on a man who has dedicated his life to the service of others. It is time to put Senator Clinton and Reverend Wright out to pasture -- permanently.