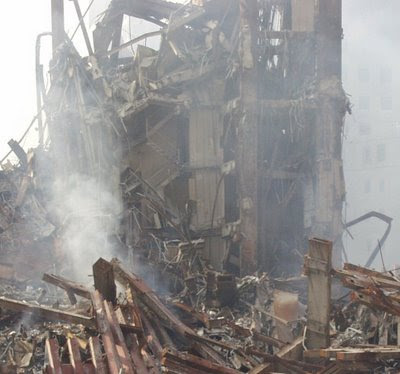 Nuked!
As many people have believed, it apparently does take more than two planes to bring down skyscrapers like the World Trade Center. An article has been formally published in a Dutch peer-reviewed Chemical Physics journal, today entitled:

The paper ends with this sentence: “Based on these observations, we conclude that the red layer of the red/gray chips we have discovered in the WTC dust is active, unreacted thermitic material, incorporating nanotechnology, and is a highly energetic pyrotechnic or explosive material.”

In short, the paper debunks the official story that “no evidence” exists for explosive/pyrotechnic materials in the WTC buildings.

What is high-tech explosive/pyrotechnic material in large quantities doing in the WTC dust? Who made tons of this stuff and why? Why have government investigators refused to look for explosive residues in the WTC aftermath?

The nine authors undertook an in-depth study of unusual red-gray chips found in the dust generated during the destruction of the World Trade Center on 9/11/2001. The article states: “The iron oxide and aluminum are intimately mixed in the red material. When ignited in a DSC device the chips exhibit large but narrow exotherms occurring at approximately 430 ˚C, far below the normal ignition temperature for conventional thermite. Numerous iron-rich spheres are clearly observed in the residue following the ignition of these peculiar red/gray chips. The red portion of these chips is found to be an unreacted thermitic material and highly energetic.” The images and data plots deserve careful attention.

Thermite is a highly explosive agent consisting mostly of aluminum and iron oxide, and is used to cut steel in building controlled demolitions, and is also used in welding and in military applications.

Using optical microscopy, scanning electron microscopy, X-ray energy dispersive spectroscopy, and differential scanning calorimetry, the scientists were able to determine that the Thermite present is of a specialized type called Nano-thermite or Superthermite. It burns hotter and has a lower ignition temperature than normal Thermite, and is produced at laboratories such as Lawrence Livermore, incidentally thought to be the same lab that produced the anthrax sent out shortly after 9/11. Nano-thermite could not be accidentally present in dust samples collected at four different sites, nor could it be the result of clean-up operations at ground zero, as one of the samples was retrieved a mere ten minutes or so after the collapse of the second tower.