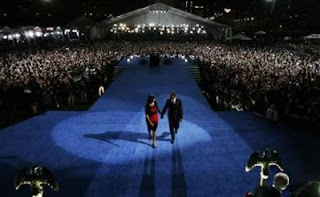 First I want to congratulate you on your historical victory and to thank you for sticking to your word and making a concerted effort to bring about a bi-partisan approach to government. Unfortunately, the Republican Party through its Emperor of Evil, John Boehner, again displayed its contempt for the American people by not giving one single vote in support of your Stimulus Package. That demonstrates that their commitment to the American people is non-existent.

Now I am sitting here watching financial guru Jim Cramer ranting about how this Stimulus Package is too small and that you don't realize the depths to which this economy has fallen. He may be right, he may be wrong -- we'll see. We all agree that you are facing a monumental task, one that perhaps exceed that which any President ever faced. Most people say you need a Miracle.

Here is the gist of another article I read: "Over the last 20 years, America has degenerated into a nation of consumers, with 72 percent of Gross Domestic Product now being accounted for by consumer spending—most of it going for things that are produced overseas and shipped here. That is not an economic model that is sustainable, and it is a model that has just suffered what is certainly a mortal blow."

A Miracle is Needed
A man is lying in the street barely breathing, the result of a heart attack. The paramedics arrive, and upon seeing that he is almost gone, jam the needle into his heart in a last-ditch attempt to save him. In my opinion and experience, this is not the time to try to fix our economy a step at a time, we simply don't have that luxury. We need our own Needle, NOW . . . and we have it. The question is, Mr. President, do YOU have the courage to use it? If you do, I promise you that you will brought about the Miracle we needed to not only turn around, but make our economy surge.

LEGALIZE INDUSTRIAL HEMP and allow the ingenuity of the American people to take over. As I am sure you are aware, in 1938, Popular Mechanics Magazine declared that Hemp was the "next billion dollar industry" and a boon for farmers across America. However, the corporate influence of men like Hearst and DuPont stepped in. The Marijuana Tax Act is passed and forbids hemp farming in the US. Dupont files a patent for nylon and Hearst spreads horrible negative propaganda through his national network of newspapers.

Farming - In 1938, Popular Mechanics Magazine declared that Hemp was the next billion dollar industry and a boon for farmers across America. However, the corporate influence of men like Hearst and DuPont stepped in. The Marijuana Tax Act is passed and forbids hemp farming in the US. Dupont files a patent for nylon.

In 1991, Willie Nelson issued a plea to America to come to its senses and legalize Industrial Hemp, a product that was mandatory for the farmers of the Colonies, and for which the United States Government made a movie entitled, "Hemp for Victory". That was eighteen (18) years ago! Why is it STILL illegal? To protect the financial corporate interests of the textile, petrochemical, and lumber (paper) industries. How long will America stand for corporate America sticking it to the little guy?


NOW IS THE TIME! THE PLANET NEEDS HELP!

Industrial hemp is an incredible resource. Hemp is harvested for its fibers for hemp clothing and seeds for hemp oil. With a relatively short growth cycle of 100-120 days, it is an efficient and economical crop for farmers to grow, however, industrial hemp cannot be commercially grown in the United States because it is erroneously confounded with marijuana. In fact, industrial hemp and marijuana are different breeds of Cannabis sativa. Smoking large amounts of hemp flowers can produce a headache but not a high!

A few years back, only TWO (2) state senators voted for the legalization of hemp. One was Barack Obama. NOW IS THE TIME!

Auto Industry - Your efforts to allow states to set their own emissions limits have already been met with opposition from the Auto Industry. These arrogant automakers have taken billions in corporate welfare known as the "bailout" and still don't get it. There is so much that can be done with hemp in the auto industry it is truly amazing. From building cars out of hemp to driving them on fuel from hemp, the world is open to America to use its ingenuity.

Here is why General Motors does not deserve ANY help whatsoever. NONE. Mr. President, How would you like Americans to have a car that runs for the equivalent of 60 cents a gallon? That we can "gas up" in our own garage? That has zero emissions and is super easy to repair and maintain? General Motors made and sold such a car in the late 1990s. They produced and leased out 200 of them. One was to Tom Hanks who loved it so much he wanted to extend or renew his lease. They refused, called in all of the cars, and destroyed them. In fact, the auto industry is calling in all electric cars and shredding them as we speak. Here is the proof:

In 1942, Henry Ford assembled a car out of plastic made from hemp:

Here is an example of more American ingenuity:


Construction and Housing - We can learn a lot from a lady in France who builds 300 homes per year using "hemp cement" which is stronger yet six (6) times lighter than regular cement.

Medical - "In 1860 the Ohio State Medical Society concurred with Biblical scholars that 'the gall and vinegar or myrrhed wine offered to our saviour immediately before his crucifixion was a preparation of Indian hemp." - Chris Bennett Green Gold

Thomas was not just whistling "Dixie". In World War II, there was a shortage of hemp in the United States which was seriously affecting the war effort. The United States government, in a desperate attempt to encourage American farmers to grow hemp so we could have canvas, rope, etc., produced the following movie called "Hemp for Victory". I firmly believe that this statement from the United States Department of Agriculture is all the justification you need for legalizing industrial hemp and decriminalizing marijuana, which in itself, would free up our justice system and take possession of this medicinal herb out of the courts, returning many deserving people to their families and jobs and decreasing our unjustified prison population.

Here is the movie:

Justification: You may need this in America but will be hailed around the world. I'm aware that you would face some initial opposition from the religious right on this so I've done some homework:
Cannabis Hemp is one of the many blessings that God gave to man as stated at Genesis 1:11 and Genesis 1:29, and we are commanded to appreciate and to use all of God's creations as long as it is received with thanks, as stated at 1 Timothy 4:4.
At Exodus 30:22-25, God gives the recipe to Moses for holy anointing oil. One of the key ingredients of this oil is cannabis hemp. The Hebrew word Keneh-bosem is mistranslated as sweet calamus, aromatic cane or sweet cane. Evidently, the bible translators are trying to hide the fact that this is marijuana.

This oil was smeared or sprinkled on everything holy such as the priest, the tent post and everything that was put on the altar as a burnt offering. Whenever it was burned, as the smoke ascended into heaven, thus; the prayers of those seeking atonement for their sins became a restful odor to God as stated at Exodus 29:18.

At Revelations 22:2, it states that the leaves from the Tree of Life will cure the nations. This is the same tree that is talked about in Genesis 3:22; that if you partake of this tree, that the devils control will be lifted from you and can lead you in the direction of everlasting life. Furthermore; the word Christ means the anointed one and the word Christians means those who are anointed with holy anointing oil.

see: Barbara Villard
http://freelifeministry.org/id45.html
Anyway you look at it, making this gift of nature legal is the right thing to do for the country at this time in our history. To not do so may well be financially disastrous. To summarize, Mr. President, just one simple stroke of your pen, the legalization of industrial hemp, will save the United States economy, revitalize several industries at once, and restore our country to its former greatness. I wish you success.