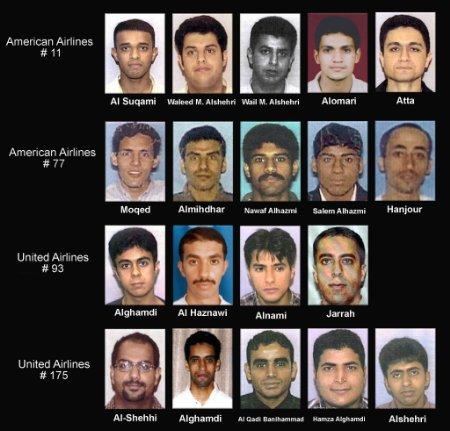 THEIR names were flashed around the world as suicide hijackers who carried out the attacks on America. Four of the men - all from Saudi Arabia - spoke of their shock at being mistakenly named by the FBI as suicide terrorists. These accused hijackers were not even in the United States on September 11 and all four are alive in their home country. They said that they were "outraged" to be identified as terrorists. One has never been to America and another is a Saudi Airlines pilot who was on a training course in Tunisia at the time of the attacks.  Saudi Airlines said it was considering legal action against the FBI for seriously damaging its reputation and that of its pilots.
The FBI released the list of 19 suicide terrorists three days after the attacks.  The statement said that the 19 "have been identified as hijackers aboard the four airliners". Photographs and personal details were published around the world with an appeal for "information about these individuals, even though they are presumed dead". The Saudi Airlines pilot, Saeed Al-Ghamdi, 25, and Abdulaziz Al-Omari, an engineer from Riyadh, are furious that the hijackers' "personal details" - including name, place, date of birth and occupation - matched their own. Mr Al-Ghamdi was named as a terrorist on the United Airlines flight that crashed in Pennsylvania - a plane said by some experts to have been heading for the White House. He first knew that he was on the FBI's list when he was told by a colleague. Speaking from Tunisia, he said: "I was completely shocked. For the past 10 months I have been based in Tunis with 22 other pilots learning to fly an Airbus 320. The FBI provided no evidence of my presumed involvement in the attacks.  You cannot imagine what it is like to be described as a terrorist - and a dead man - when you are innocent and alive."
The airline was angry too. Officials brought Mr Al-Ghamdi back to Saudi Arabia last week for a 10-day holiday to avoid arrest or interrogation. An official said: "We are consulting lawyers about what action to take to protect the reputation of our pilots." Mr Al-Ghamdi faced further embarrassment when CNN, the American television network, flashed a photograph of him around the world, naming him as a hijack suspect. The FBI had published his personal details but with a photograph of somebody else, presumably a hijacker who had "stolen" his identity. CNN, however, showed a picture of the real Mr Al-Ghamdi. He said that CNN had probably got the picture from the Flight Safety flying school he attended in Florida. CNN has since broadcast a clarification saying that the photograph may not be that of the accused.
Mr Al-Omari, who was accused of hijacking the American Airlines plane that smashed into the the World Trade Centre's north tower, said that he was at his desk at the Saudi telecommunications authority in Riyadh when the attacks took place. He said: "I couldn't believe it when the FBI put me on their list. They gave my name and my date of birth, but I am not a suicide bomber. I am here. I am alive. I have no idea how to fly a plane. I had nothing to do with this." Mr Al-Omari said his passport was stolen when his apartment in Denver, Colorado, was burgled in 1995. He had been studying engineering at Denver University since 1993. He was given a new passport in Riyadh on December 31, 1995 and returned to America to resume his studies in January 1996. After graduating last year he returned to Riyadh to join the electricity authority and later moved to the telecommunications authority.
The other two men accused of being terrorists are Salem Al-Hamzi and Ahmed Al-Nami. Mr Al-Hamzi is 26 and had just returned to work at a petrochemical complex in the industrial eastern city of Yanbou after a holiday in Saudi Arabia when the hijackers struck. He was accused of hijacking the American Airlines Flight 77 that hit the Pentagon. He said: "I have never been to the United States and have not been out of Saudi Arabia in the past two years." The FBI described him as 21 and said that his possible residences were Fort Lee or Wayne, both in New Jersey.
Mr Al-Nami, 33, from Riyadh, an administrative supervisor with Saudi Arabian Airlines, said that he was in Riyadh when the terrorists struck. He said: "I'm still alive, as you can see. I was shocked to see my name mentioned by the American Justice Department. I had never even heard of Pennsylvania where the plane I was supposed to have hijacked." He had never lost his passport and found it "very worrying" that his identity appeared to have been "stolen" and published by the FBI without any checks. The FBI had said his "possible residence" was Delray Beach in Florida.
The FBI admitted that there was some doubt about the identities of some of the suspects. A spokesman said: "The identification process has been complicated by the fact that many Arabic family names are similar. It is also possible that the hijackers used false identities." The spokesman declined to say whether the FBI would apologize but added: "If we have made mistakes then obviously that would be regrettable but this is a big and complicated investigation."
Does anyone remember reading this follow-up statement by the FBI in our mainstream media? Or being told of these facts by our government? I don’t. So then, what about Osama bin Laden? What did he say in regards to his being accused of this crime? It's not what you have been told.  We'll address that issue in another thread.