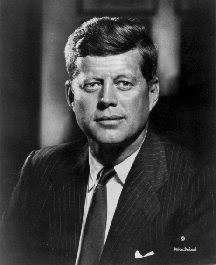 President John F. Kennedy
In response to a recent article on the Bush Family, some readers have suggested that George H.W. Bush may have had a connection to the JFK assassination, especially since former Watergate burglar, E. Howard Hunt's deathbed confession. In my many years researching the assassination, I do have information that apparently links Mr. Bush to the conspiracy. It's hard to determine just who knew or did what, but there is some damning information that certainly points to many people knowing in advance. In fact, it appears that everyone knew except Kennedy.

In the "Findings of the Select Committee on Assassinations in the assassination of President John F. Kennedy in Dallas, Texas, November 22, 1963," pg. 1976, #C, it reads as follows:
"The Committee believes, on the basis of the evidence available to it, that President John F. Kennedy was probably assassinated as a result of a conspiracy.
The Committee is unable to identify the other gunman or the extent of the conspiracy."
Here is what I wrote in 1999, prior to Dubya becoming President:
"Papa George Bush is still seething at his loss to Bill Clinton and Al Gore. He is the brains behind Junior and it will be he and his close-knit group of the “Secret Wing” of the Republican Party that will be running the government during a George W. Bush Presidency. Dick Cheney was handpicked by his dad to be his running mate. Why? Because Dick Cheney is tied to this group in a very intimate way".
We do know this:  From 1976 to 1979, Bush directed the Central Intelligence Agency (CIA). In 1979 he made his first try to become President of the United States. He lost the Republican Party nomination to Ronald Reagan who asked Bush to be his Vice-President. Bush became Vice- President in 1980 and headed the National Security Council's "Crisis Management Team".   Mr. Bush was busy as Vice-President becoming the largest crack cocaine dealer in the World.   After becoming the World's #1 Drug Dealer during his term in office as Vice-President, in 1988, George Bush was elected President.
The Earlier Years
We have provided evidence of George Bush’s illegal activities while Vice President. Lord only knows the kinds of activities he must have been involved in during his tenure as Director of the CIA. However, we do know something of what he was doing earlier in his career.
In late 1958, Fidel Castro was still fighting a guerilla war against the corrupt regime of Fulgencio Batista in Cuba. Fearful of Castro's revolution, many large corporations and people with money including the Mafia, left Cuba for the United States. Castro overthrew Batista in 1959.

To prevent the loss of more capital, Castro began to nationalize some of the businesses in Cuba. In the process of doing so he came into direct conflict with the interests of rich and powerful Americans. Castro's ousting of Batista resulted in Pepsi-Cola losing a sweetheart deal for sugar. Castro told Pepsi to "pay world market prices for sugar". United Fruit Company and Ford Motor Company also stood to lose hundreds of millions of dollars with Castro's takeover. The Rockefellers owned a significant amount of stock in United Fruit and David Rockefeller had close ties to Ford Motors through Bechtel, having hunted as a little boy with Henry Ford II in Maine. Pepsi-Cola worked out a plan with Vice President Richard Nixon whom they expected to become President in the elections of 1960 to invade Cuba, assassinate Castro, and return the sugar plantations to Pepsi. Nixon agreed and recruited George Bush who worked out of the CIA office in Miami, and E. Howard Hunt of Watergate fame to invade Cuba. They called their plan Operation 40. The CIA launched the plan. One thing they didn't plan on -- Nixon lost the election to JFK.

When JFK found out about the covert operation, he decided to cut off air cover for the 1961 invasion. Bush and the CIA lost hundreds of their best men, the worst blow the CIA had ever suffered. Now, not only were Nixon, Bush and the CIA furious at JFK, so was Pepsi, United Fruit, Ford Motors, the Rockefellers, and the Mafia drug runners with close ties to LBJ, not to mention Hoover, the oil industry, etc..
THE ASSASSINATION
The night BEFORE the assassination, November 21, 1963, a "Victory Party" to celebrate the assassination of JFK was held at two separate locations in Dallas, with attendees shuffling back and forth between the two locations. A number of well-known people including high ranking politicians, known assassins associated with the Mafia, Cuban exiles and Intelligence agents stayed at the Cabana Motel and other sites in and around Dallas on the eve of the assassination. There were parties at the Cabana Hotel and the mansion of a rich oilman named Murchison. Among the visitors were:

Richard Nixon - The future President was driven to the Murchison party by a man named Peter O'Donnell.
Marita Lorenz - a former Castro mistress and CIA affiliate who left Dallas prior to the assassination.
Frank Sturgis and E. Howard Hunt - CIA Contract Agents and future Watergate burglars who were two of three tramps who on the day of the assassination, created a diversion behind the grassy knoll and were arrested and held until they produced CIA credentials. They worked out of the Florida office of the CIA that was run by Papa Bush.
Jack Ruby - a long-time wannabe with ties to the Mafia and Al Capone in his earlier days; He was a gunrunner for Cuban exiles and knew Oswald. Ruby also had ties with the Dallas police department and was an employee of Nixon in California many years prior.
H.L. Hunt - One of the wealthiest oil men in Texas. It is known that he took Ruby to lunch in a midtown hotel.
J. Edgar Hoover - Cross-dressing FBI Director who was a close friend of LBJ and was known to have Mafia ties. Hoover hated the Kennedys.
Lyndon B. Johnson, Vice President - His Mistress, Madeleine Brown quoted LBJ as saying at the party "After tomorrow, it's the last time those goddam Kennedys will embarrass me again." She said this years later on the TV program, A Current Affair.
Larry Meyer - a member of the Chicago Mafia and close friend of Jack Ruby.

John McCloy - A strong Rockefeller supporter and close friend from Chase Manhattan Bank. The former Assistant Secretary of Defense and head of the World Bank later became a member of the Warren Commission to "Cover-up" the assassination conspiracy.
Bruce Alger - former Texas Republican Senator.
Orlando Busch & Pedro D. Lanz, - Cuban exile leaders and members of Operation 40. Bosch was later convicted of a terrorist bombing of an airliner that killed more than 70 people including a young soccer team.  He was pardoned by President Bush and is an associate of Jeb in Florida.
Eugene Brading - an ex-convict who visited Lamar Hunt's offices the day before the assassination with Ruby. He was also in Los Angeles the night Bobby Kennedy was killed.
George Brown - of Brown & Root Construction, a subsidiary of Dallas-based Halliburton Company from whom Dick Cheney took over $30 million in retirement as its CEO. George Brown amassed enormous wealth on Vietnam War projects. In 1995, Brown & Root made $546 million providing logistical support to the Army and $405 million to provide support in Bosnia. Kennedy's assassination paid off big-time for Mr. Brown and later for Mr. Cheney!
Nixon’s presence in Dallas is confirmed by a newspaper article. In fact, there are two articles regarding Mr. Nixon. One says Nixon and actress Joan Crawford were both staying at the Baker Hotel and were visiting to attend a meeting of the Pepsi-Cola bottlers (what a coincidence!). Interestingly, Nixon declined any security. He had nothing to worry about.

What Nixon and Bush Said After JFK was Killed
Richard Nixon - in a Top Secret FBI document, when questioned by FBI Assistant Director of the New York Office, Nixon said, "the only time he was in Dallas during 1963 was two days prior to the assassination of President John F. Kennedy". He lied. Nixon did not like to lose. How could he forget he was there the day JFK was shot? What reason would he have to lie unless he was part of the conspiracy that killed John F. Kennedy?  Pepsi-Cola? It looks like their CEO Donald Kendall was in Dallas to celebrate JFK’s assassination with Nixon.
I read from another source that when Washington Post columnist Bob Woodward asked George Bush where he was he said he “couldn’t remember”. Was he kidding? Is there really anyone in America who doesn’t remember?
The Evidence
Proof that Bush was with the CIA in Florida which he still denies. 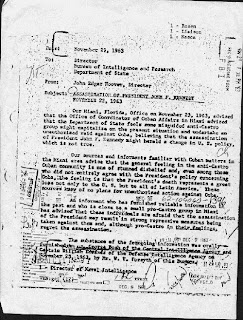 Proof the Nixon Lied About Being in Dallas: 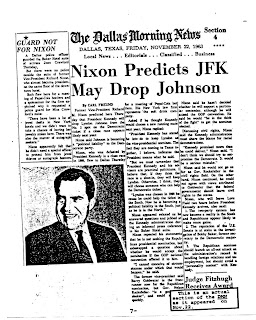 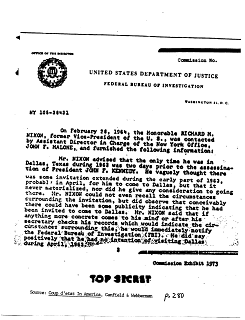 There you have it.  It is now more than 45 years since JFK was killed and we may never know the details and who exactly knew or did what.  However, it is very clear that Papa George Bush and Richard Nixon felt it necessary to lie to the authorities about where they were and what they knew.