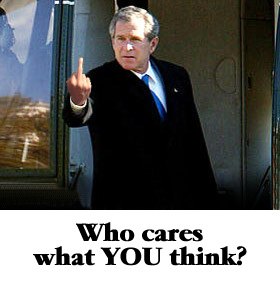 George W. Bush always claimed he was a uniter, not a divider. Unfortunately his administration has divided this country as it has never been divided before. However, as the saying goes, "What goes around, comes around". Journalists on the right and left have apparently come together in their assessment of the Grand Old Party and its effects on this country. "I no longer have any clear idea what, exactly, the modern conservative movement stands for. Eight years of “conservative” government has brought us a doubled national debt, ruinous expansion of entitlement programs, bridges to nowhere, poster boy Jack Abramoff and an ill-premised, ill-waged war conducted by politicians of breathtaking arrogance. As a sideshow, it brought us a truly obscene attempt at federal intervention in the Terry Schiavo case."

"Since George W. Bush became president, the Republican Party has presided over massive, out-of-control government spending, converted a federal budget surplus into a half-trillion-dollar deficit, and looked the other way while Wall Street's greed and stupidity turned the hallowed free market into scorched earth. Now the party has to watch as a Republican president orchestrates the biggest government intervention into the workings of the private sector since the New Deal."


Thank you, President Bush, for uniting the country against your party and its propensity toward greed and corruption.