Due to the threat of placing bloggers in jail for a felony for embedding YouTube videos, we will cease publishing this blog effective immediately. Freedom is just another word for nothing left to lose...

EconomicPolicyJournal.com: The Bastards Want to Track Our Gold!

EconomicPolicyJournal.com: The Bastards Want to Track Our Gold!
Posted by WIZolman at 8:46 AM No comments:

Obama Takes Out Osama -- Bush Had NOTHING to do with it!

Barack Obama in 2008:  "I will move on actionable intelligence in Pakistan, ..."

What did George Bush do to catch bin Laden?  In 2005, he DISBANDED the CIA unit organized to capture bin Laden.  Bush wasn't interested in catching bin Laden.  Don't take my word for it, take the word of Mr. Bush in 2002 (just six months after 9/11).  2005, the year Bush disbanded his unity, was also conveniently the year bin Laden's mansion was being built.
What a difference in focus, poise and intensity.  For those of you Obama-haters, open your eyes.  Bush was an embarrassment and had little to no class.  Obama stood up to the other Democratic candidates and dominated the conversation.  Now, let's examine the attack on bin Laden.

Originally it was scheduled for March, but Obama delayed it.  Why?  Because it was a bombing mission that would have left little.  Obama wanted the world to have a proof of death, so HE was responsible for the change in strategy, i.e., to go with a Special Ops mission using Navy Seals (I'll bet Jesse Ventura would have cut off his hair to go along).

Before the mission was to begin, Obama asked if they had a backup plan in the event one went down?  They had not so they added backup helicopters and, what do you know, one DID GO DOWN.  The backup helicopter got them out of there.  The whole mission took 40 minutes.  It was a PRECISION OPERATION and our Commander-in-Chief OBAMA, Leon Panetta, and the US Navy Seals deserve tremendous credit.  In fact, if the reader is truly an American, he will fill with pride at their accomplishments.

Obama was especially smart to have the mission viewed on closed circuit TV in the Situation Room.  The faces on the viewers tell quite a story: 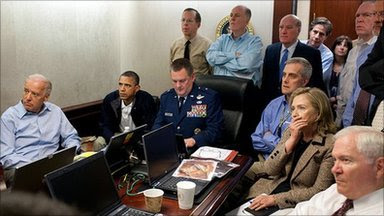 How cool was Obama?  Here he was the night before on the eve of conducting an operation that would go down in World History alongside such events as the JFK Assassination, on the anniversary of the death of Hitler:


Had Bush been responsible for conducting this operation, the right wing would be calling for him to be awarded the Congressional Medal of Honor and to have his image carved up on Mt. Rushmore.  No, they allow him a week to continue having to answer more questions about his credentials bo bozos like the Donald, and outright idiots like Sarah "I can see Alaska from here..." Palin.

Frankly, I'm fed up with these right-wingers who claim to be patriots.  If you are a patriot, stand up and applaud a man who has shown superior leadership skills, and that he is tough -- very tough, when it comes to foreign policy and his dealings with terrorists.  Cut out the worst disrespect of the Presidency that I have seen in my lifetime.

I am proud to have a President that is so cool under fire.  One more thing.  There was NO ONE SOURCE of information that led to bin Laden.  Leon Panetta says without a doubt that this mission was accomplished WITHOUT waterboarding, which Republicans insist is the reason Bush should receive credit.  Waterboarding!  Torture that is BANNED by the Geneva Convention.  That is what the Republicans stand for.  Grow up, children.  Be patriotic.  Salute our President.  He has earned it.

My Thoughts on the Killing of Osama bin Laden

"I mourn the loss of thousands of precious lives, but I will not rejoice in the death of one, not even an enemy. Returning hate for hate multiplies hate, adding deeper darkness to a night already devoid of stars. Darkness cannot drive out darkness: only light can do that. Hate cannot drive out hate: only love can do that." ~ Martin Luther King, Jr. 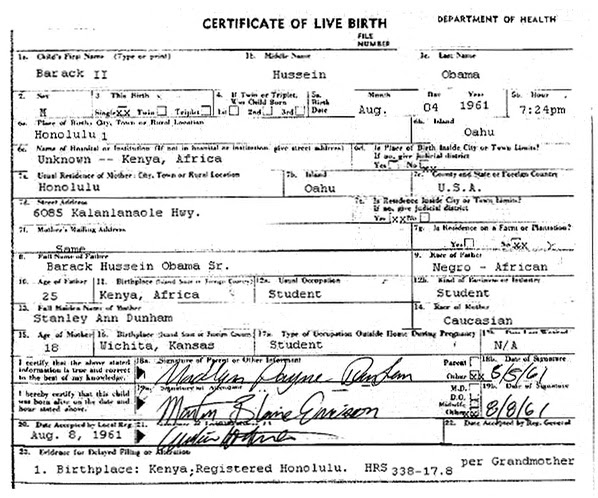 Posted by WIZolman at 5:47 AM No comments:

Posted by WIZolman at 5:40 AM No comments:

Posted by WIZolman at 4:50 PM No comments: