Why Obama MUST Become President

Watch this short video and you will understand.

Music: Which Side Are you On?
Natalie Merchant
By Florence Reece (1930) 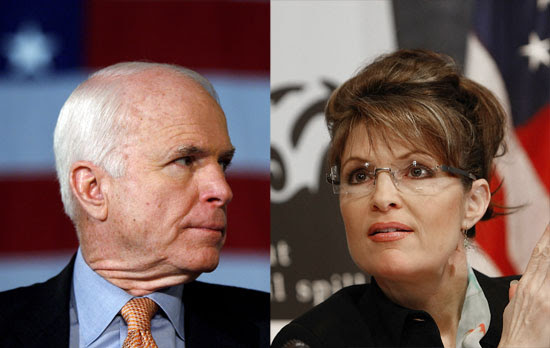 The Odd Couple
John McCain has embarrassed himself and his party and has thrown America under the bus in his desperate attempt to make political hay. When Barack Obama made his selection of Joe Biden as his VP candidate, he called it his "most important exercise of sound judgment" and stressed the importance of selecting someone who would be able to immediately step into the job of the Presidency.

John McCain, by picking Sarah Palin, Governor of Alaska, as his VP candidate is telling America that he believes that this lady is the MOST QUALIFIED and best person available to step into the Presidency in the event something should happen to him. By selecting Palin, McCain is saying that she is more qualified than Mitt Romney, Tom Ridge, Tim Pawlenty, and even Joe Lieberman. Even Alaskans are shocked: REACTION IN ALASKA.

If his intent was to try to make inroads into Hillary voters by selecting a woman, how about selecting one that is qualified such as Elizabeth Dole, Christine Todd Whitman, Susan Collins, Kay Bailey Hutchinson? Carly Fiorina would have been an interesting selection, but Sarah Palin?

This soccer mom and mother of five kids, the youngest of whom is a 4-month old boy with Down's Syndrome, less than two years ago was the mayor of a town of 9.000 people. She has been Governor for just over 18 months and is already the subject of a legislative investigation by a vote of 12-0 by her colleagues, both Democrat and Republican, for "abuse of office". She has referred to Hillary Clinton as a "whiner".

With all due respect to Ms. Palin, as a parent, it should be her first duty to care for her baby, rather than run around the country as McCain's "trophy candidate".

Ms. Palin is FOR drilling in Alaska, against abortion of any kind including in the event of rape or incest, and is "not interested in the War in Iraq"!
* She supported right-wing extremist Pat Buchanan for president in 2000.
* Palin thinks creationism should be taught in public schools.
* She's doesn't think humans are the cause of climate change.
* She's solidly in line with John McCain's "Big Oil first" energy policy. She's pushed hard for more oil drilling and says renewables won't be ready for years. She also sued the Bush administration for listing polar bears as an endangered species—she was worried it would interfere with more oil drilling in Alaska.

This is the person John McCain would have America trust in the event he should die in office. What does Ms. Palin think of the office of the Vice President?

THIS IS THE MOST DANGEROUS VP NOMINATION IN AMERICAN HISTORY!
Imagine that an international crisis is brewing and the President becomes incapacitated or dies in office. Would you rather have Joe Biden and his vast international and foreign policy experience and personal knowledge of foreign leaders in charge? Or, are you comfortable with a soccer mom who isn't interested in Iraq?

John McCain has just disqualified himself from the Presidency for lack of judgment.

Posted by WIZolman at 6:12 AM No comments:

Barack Obama delivers his acceptance speech at the 2008 Democratic National Convention in Denver, Colo. Forty-five years ago, I watched Martin Luther King deliver his infamous "I Have a Dream Speech" to over 250,000 people at the Lincoln Memorial. Tonight, a portion of that dream became a reality as the first man of color accepted the nomination of a major party in a Presidential election. This is a truly amazing speech by a remarkable man. Enjoy:


Staunch conservative Pat Buchanan had nothing but love for Barack Obama's acceptance speech at the 2008 Democratic national convention given before 85,000 people in Denver's Mile High Stadium. This reaction is as amazing as the speech itself!

"Our task is not merely one of itemizing Republican failures. Nor is that wholly necessary. For the families forced from the farm do not need to tell us of their plight. The unemployed miners and textile workers know that the decision is before them in November. The old people without medical care, the families without a decent home, the parents of children without a decent school: They all know that it's time for a change.

We are not here to curse the darkness; we are here to light a candle. As Winston Churchill said on taking office some twenty years ago: If we open a quarrel between the present and the past, we shall be in danger of losing the future.

Today our concern must be with that future. For the world is changing. The old era is ending. The old ways will not do."


NOTE: IN 1960, REPUBLICANS SAID JFK DID NOT HAVE ENOUGH EXPERIENCE. THEY SAID THE SAME THING ABOUT BILL CLINTON. SOUND FAMILIAR? BARACK OBAMA'S EXPERIENCE LEVEL IS IDENTICAL TO THAT OF ABRAHAM LINCOLN.

The Ancient One couldn't remember how many houses he owns. Care to help?

Posted by WIZolman at 8:34 PM No comments:

A Humorous but Accurate Take on the Upcoming General Election:

Posted by WIZolman at 6:02 AM No comments:

Listen to the complete radio interview of Edgar Mitchell on Kerrang Radio July 23, 2008

Posted by WIZolman at 6:34 AM No comments: