Behind the Arizona Immigration Law:
GOP Game to Swipe the November Election


Our investigation in Arizona discovered the real intent of the show-me-your-papers law. 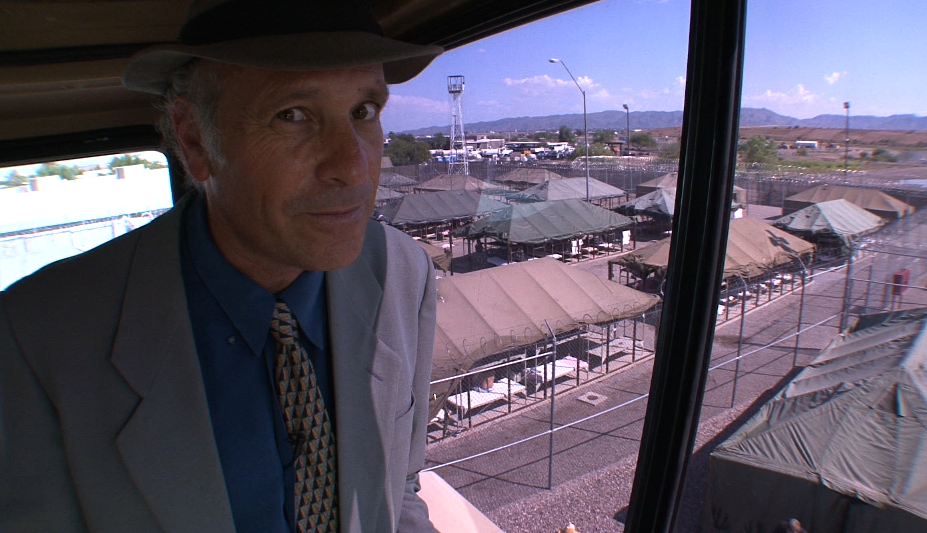 Reporter Palast in guard tower over Joe Arpaio's jail, Maricopa County, Arizona
[Phoenix, AZ.] Don't be fooled. The way the media plays the story, it was a wave of racist, anti-immigrant hysteria that moved Arizona Republicans to pass a sick little law, signed last week, requiring every person in the state to carry papers proving they are US citizens.

I don't buy it. Anti-Hispanic hysteria has always been as much a part of Arizona as the Saguaro cactus and excessive air-conditioning.

What's new here is not the politicians' fear of a xenophobic "Teabag" uprising.

What moved GOP Governor Jan Brewer to sign the Soviet-style show-me-your-papers law is the exploding number of legal Hispanics, US citizens all, who are daring to vote -- and daring to vote Democratic by more than two-to-one. Unless this demographic locomotive is halted, Arizona Republicans know their party will soon be electoral toast. Or, if you like, tortillas.

In 2008, working for Rolling Stone with civil rights attorney Bobby Kennedy, our team flew to Arizona to investigate what smelled like an electoral pogrom against Chicano voters ... directed by one Jan Brewer.

Brewer, then Secretary of State, had organized a racially loaded purge of the voter rolls that would have made Katherine Harris blush. Beginning after the 2004 election, under Brewer's command, no less than 100,000 voters, overwhelmingly Hispanics, were blocked from registering to vote. In 2005, the first year of the Great Brown-Out, one in three Phoenix residents found their registration applications rejected.

That statistic caught my attention. Voting or registering to vote if you're not a citizen is a felony, a big-time jail-time crime. And arresting such criminal voters is easy: after all, they give their names and addresses.

So I asked Brewer's office, had she busted a single one of these thousands of allegedly illegal voters? Did she turn over even one name to the feds for prosecution?

Which raises the question: were these disenfranchised voters the criminal, non-citizens Brewer tagged them, or just not-quite-white voters given the José Crow treatment, entrapped in document-chase trickery?

The answer was provided by a federal prosecutor who was sent on a crazy hunt all over the Western mesas looking for these illegal voters. "We took over 100 complaints, we investigated for almost 2 years, I didn't find one prosecutable voter fraud case."

This prosecutor, David Iglesias, is a prosecutor no more. When he refused to fabricate charges of illegal voting among immigrants, his firing was personally ordered by the President of the United States, George W. Bush, under orders from his boss, Karl Rove.

Iglesias' jurisdiction was next door, in New Mexico, but he told me that Rove and the Republican chieftains were working nationwide to whip up anti-immigrant hysteria with public busts of illegal voters, even though there were none.

"They wanted some splashy pre-election indictments," Iglesias told me. The former prosecutor, himself a Republican, paid the price when he stood up to this vicious attack on citizenship.

But Secretary of State Brewer followed the Rove plan to a T. The weapon she used to slice the Arizona voter rolls was a 2004 law, known as "Prop 200," which required proof of citizenship to register. It is important to see the Republicans' latest legislative horror show, sanctioning cops to stop residents and prove citizenship, as just one more step in the party's desperate plan to impede Mexican-Americans from marching to the ballot box.

[By the way, no one elected Brewer. Weirdly, Barack Obama placed her in office last year when, for reasons known only to the Devil and Rahm Emanuel, the President appointed Arizona's Democratic Governor Janet Napolitano to his cabinet, which automatically moved Republican Brewer into the Governor's office.]

State Senator Russell Pearce, the Republican sponsor of the latest ID law, gave away his real intent, blocking the vote, when he said, "There is a massive effort under way to register illegal aliens in this country."

The horde of five million voters who swam the Rio Grande just to vote for Obama was calculated on a Republican website extrapolating from the number of Mexicans in a border town who refused jury service because they were not citizens. Not one, in fact, had registered to vote: they had registered to drive. They had obtained licenses as required by the law.

The illegal voters, "wetback" welfare moms, and alien job thieves are just GOP website wet-dreams, but their mythic PR power helps the party's electoral hacks chop away at voter rolls and civil rights with little more than a whimper from the Democrats.

Indeed, one reason, I discovered, that some Democrats are silent is that they are in on the game themselves. In New Mexico, Democratic Party bosses tossed away ballots of Pueblo Indians to cut native influence in party primaries.

But what's wrong with requiring folks to prove they're American if the want to vote and live in America? The answer: because the vast majority of perfectly legal voters and residents who lack ID sufficient for Ms. Brewer and Mr. Pearce are citizens of color, citizens of poverty.

According to a study by prof. Matt Barreto, of Washington State University, minority citizens are half as likely as whites to have the government ID. The numbers are dreadfully worse when income is factored in.

Just outside Phoenix, without Brewer's or Pearce's help, I did locate one of these evil un-American voters, that is, someone who could not prove her citizenship: 100-year-old Shirley Preiss. Her US birth certificate was nowhere to be found as it never existed.

In Phoenix, I stopped in at the Maricopa County prison where Sheriff Joe Arpaio houses the captives of his campaign to stop illegal immigration. Arpaio, who under the new Arizona law, will be empowered to choose his targets for citizenship testing, is already facing federal indictment for his racially-charged and legally suspect methods.

I admit, I was a little nervous, passing through the iron doors with a big sign, "NOTICE: ILLEGAL ALIENS ARE PROHIBITED FROM VISITING ANYONE IN THIS JAIL." I mean, Grandma Palast snuck into the USA via Windsor, Canada. We Palasts are illegal as they come, but Arpaio's sophisticated deportee-sniffer didn't stop this white boy from entering his sanctum.

But that's the point, isn't it? Not to stop non-citizens from entering Arizona -- after all, who else would care for the country club lawn? -- but to harass folks of the wrong color: Democratic blue.

Posted by WIZolman at 9:57 AM No comments:

Nearly 300 members of Congress have signed on to a declaration reaffirming their commitment to "the unbreakable bond that exists between [U.S.] and the State of Israel", in a letter to Secretary of State Hillary Clinton. The letter was sent in the wake of the severe recent tensions between Israel and the U.S. over the Israeli decision to construct more than 1,600 new housing units in East Jerusalem, a project it announced during U.S. Vice President Joe Biden's visit to the region.

The letter from Congress is a clear violation of their oath of allegiance to America and is defined as treason. Our elected leaders are telling Israel that it is O.K. for them to do what they want, no matter what Obama and Clinton say. It simply reaffirms this famous quote so ignored by the American media:

"Every time we do something you tell me America will do this and will do that . . . I want to tell you something very clear: Don't worry about American pressure on Israel. We, the Jewish people, control America, and the Americans know it." - Israeli Prime Minister, Ariel Sharon, October 3, 2001

Where Has All the Money Gone?

Visit msnbc.com for breaking news, world news, and news about the economy

Posted by WIZolman at 8:34 PM No comments: