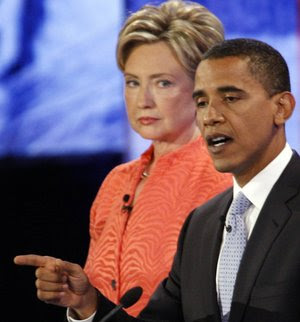 At the so-called ABC Debate, Barack Obama withstood a wholesale barrage of "personal attack' questions that have nothing to do with the issues facing Americans. Attack dogs Charlie Gibson and George Stephanopoulos (a former Clinton staff member) turned in embarrassing performances as they repeatedly berated Obama about his "bitter" comment and his relationship with every known radical he ever met over the past 40 years. It was one of the most partisan displays in a supposedly neutral arena that this writer has ever seen and even made FOX News look more "fair and balanced".

Couple their obvious disdain for Obama with frequent commercials and repeated shots of Chelsea Clinton and other Clinton supporters, and it was a truly embarrassing moment for our network media. This debate was mishandled and obviously slanted. Compared with the work of Brian Williams and Tim Russert of NBC, this disgraceful performance by two lightweight network hitmen, was amateurish and an insult to the American people as well as ABC itself.

Obama correctly complained about the campaign being bogged down in media-driven bits of gossip and obsessiveness over any misstatement a candidate makes. The tactic has been to "take one statement and beat it to death," Obama observed.

These two ABC News Clinton shills have no clue as to what issues resonate with Americans. It is NOT lapel pins! It is NOT a reformed terrorist who is now a distinguished professor and whose acts occurred when Obama was 8 years old! It is NOT whether Barack is more patriotic than his retired pastor! Hell no! We care about the economy. We care about homes going into foreclosure, we care about healthcare, we care about the War in Iraq, and we care about a free and independent press that reports the news and doesn't try to manipulate it. We care about fair trade agreements and whether or not a candidate will actually work to ensure that our jobs are secure and don't get outsourced.

The one positive observation we can take from this fraud dressed up as a debate was this. Hillary Rodham Clinton said emphatically that Barack Obama can win the White House, in direct contradiction to her repeated efforts to deny him the Democratic presidential nomination by insisting that he would lead the party to defeat.

"Yes, yes, yes," she said when pressed about Obama's electability and ability to defeat John McCain during a campaign debate six days before the Pennsylvania primary.

Judging from these results, it looks like the ambush failed miserably.

From NBC's Mark Murray
A statement from Obama campaign manager David Plouffe: “Tonight we saw a real choice between the old politics of point-scoring and distraction and a politics that focuses on bringing us together to actually solve the challenges we talk about every single election. Continuing the theme of her campaign, Senator Clinton used every single opportunity she had to launch misleading attack after misleading attack against Barack Obama, which is why polls show that most Americans think she’s running the most negative campaign and don’t believe she’s trustworthy. Barack Obama spoke about the issues that actually matter in people’s lives, like how he plans to end the war in Iraq, cut middle-class taxes, help people stay in their homes, and provide a secure retirement for our seniors. That’s why more Americans are putting their trust in Barack Obama to bring about the change we need in Washington."