America: From Freedom to Fascism 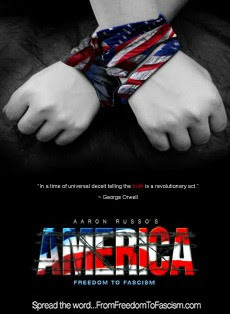 America: Freedom to Fascism is a compelling and troubling account of how the wealth of our nation was silently passed from its citizens to a handful of powerful bankers in 1913. That's the year the Federal Reserve Act and the 16th Amendment were introduced, giving a privately held corporation the means to control our finances while ensuring its interest payments through the strong arms of the newly-formed Internal Revenue Service. Ever since then, Russo suggests, Americans have been gradually conditioned to accept fewer freedoms and a lower standard of living... all the while considering debt and servitude as distinctly American values.

Russo's first and most cogent point is simple: Americans are not required to pay a federal income tax. That's a bold statement to make, as few people believe that such a fraud could be perpetrated for so long. My father, himself an accountant, insists that the income tax is a very real thing. Russo takes that same belief to IRS employees and simply asks them to cite where it says an un-apportioned income tax is required of us all. Guess what? They can't. In a telling segment Sheldon Cohen, former commissioner of the IRS, goes so far as to reject Supreme Court rulings and the Constitution as benchmarks over what is legal with regards to taxation. Russo also interviews members of the tax honesty movement as well as disenfranchised IRS agents who agree that no law on the books conjures up a requirement to send the government part of one's hard-earned paycheck. Russo then showcases court cases where those accused of tax evasion have won precisely because the prosecution cannot provide evidence of a legal federal income tax law.

It's shocking to have it hammered into your head over and over that you've thrown your money away for nothing, but repetition is good; it helps knock loose the deeply entrenched belief that we owe a portion of our livelihood to our government.