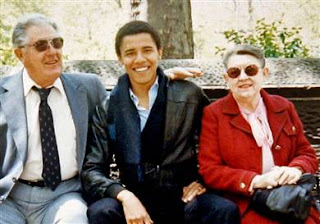 Barack Obama is shown with his grandparents, Stanley and Madelyn Dunham on a park bench in New York City, when Obama was a student at Columbia University. 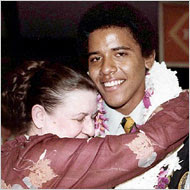 Robert Gibbs told reporters Monday that Obama's grandmother, Madelyn Payne Dunham, who helped raise him, was released from the hospital late last week. But he said her health had deteriorated "to the point where her situation is very serious."

Obama speaks about his grandmother often on the stump, describing her as an integral figure in his youth who struggled against the glass ceiling in to make a better life for him. "She's the one who put off buying a new car or a new dress for herself so that I could have a better life," he said in his acceptance speech at the Democratic National Convention in August. "She poured everything she had into me. And although she can no longer travel, I know that she's watching tonight, and that tonight is her night as well."

The 85-year-old former bank executive is said to be "gravely ill" after falling and breaking her hip, and some reports suggest she might not live to see the results of the Nov. 4 election. Whatever happens, she's already lived long enough to see her "Barry" achieve what she'd wanted for him, her brother says.

"I think she thinks she was important in raising a fine young man," Charles Payne, 83, said in a brief telephone interview Tuesday from his Chicago home. "I doubt if it would occur to her that he would go this far this fast. But she's enjoyed watching it."

Although he made his mark thousands of miles from the Honolulu apartment where she helped raise him, Obama and others credit Dunham — whose birthday is Sunday — with instilling in him an appreciation for education and hard work, and with setting an example of thrift, practicality and tolerance. "I think there's nobody more important than her, except his mother, in shaping his character," said David Mendell, who interviewed Dunham in 2004 for the Chicago Tribune and later wrote the book, "Obama: From Promise to Power."

Mendell said Obama got "that dreamer quality" seen in his speeches from his late mother. But when he has to decide whom to trust in politics, "that's his grandmother's practicality coming out in him."

"His grandmother was a real no-nonsense, no-frills woman who was far more skeptical of human nature than his mother," Mendell said Tuesday. "And in politics, he has to rely on both of those characteristics."

The oldest of four children to an oil company clerk and a teacher, Madelyn Payne grew up in a "company house" on the edge of Augusta, Kan. She was a good student and an avid reader, with a special fondness for a good murder mystery. A couple of weeks before her high school graduation in 1940, without her parents' knowledge or blessing, she married Stanley Dunham — making her a maverick long before Arizona Sen. John McCain turned the term into a campaign buzz word. While her husband was away in the Army during World War II, she was home raising their daughter, Stanley Ann, and supervising a B-29 bomber assembly line at the Boeing plant in Wichita.

After the war, she followed her husband around the country as he took a series of sales jobs and got a college degree on the GI Bill — an accomplishment she always dreamed of, but was never quite able to find the time for. Despite that, she worked her way up from a bank secretary to one of the first female bank vice presidents in Hawaii.

The couple were living in Honolulu when their daughter met Barack Obama Sr., a student from Kenya. Barack Jr. was born there in 1961 and remained with his grandparents after his father left to pursue his education. Aside from a four-year interlude during which he lived in Indonesia with his mother and stepfather, Obama spent his childhood in Honolulu — most of it in the two-bedroom, high-rise apartment where Dunham still lives.

Obama often speaks fondly of "Toot" — his version of the Hawaiian word "Tutu," or grandparent. In his memoir, "Dreams From My Father," he wrote of looking up from the basketball court to find her watching him practice from the 10th-floor window — and of how she took the secretarial job at Bank of Hawaii "to help defray the costs of my unexpected birth."

Obama was expected to resume campaigning on Saturday, though Gibbs was unsure where.