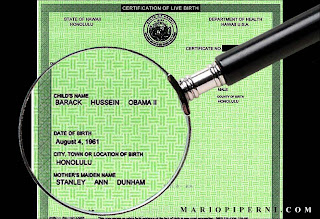 Leo Donofrio, Philip Berg, Orly Taitz. What do they have in common? They are among the "attorneys" who continue to clog America's courts with bogus claims that Barack Obama is not a natural born citizen and ineligible to be President. Never mind that they selectively ignore pertinent facts in order to claim their 15 minutes of fame and, believe me, that's all they are worth. Now we have another nutcase to join the ranks of the Evil Ones. I give you Paul Hollrah, contributing editor to FamilySecurityMatters.org and a Senior Fellow at the LIncoln Heritage Institute.

What is the Lincoln Heritage Institute? You can figure that out by simply reading one paragraph of their "open letter" to the Democratic Party. Here it is:

This is an organization that quite frankly HATES the Democratic Party and will do anything to uproot it. So, you now know the movtives behind a new article written by Mr. Hollrah as a representative of this organization in which he says Mr. Obama must resign. His reason? In his own words: "it is only necessary to establish the facts surrounding Obama’s travel to Indonesia and Pakistan in the summer of 1981."

He continues: "So it is well established that Obama did travel to Indonesia and Pakistan in 1981. What is not established, and what is critically important, is what passport he used during that trip. There are only three possibilities: Obama could have traveled under a U.S. passport… a passport first issued when he and his mother moved from Hawaii to Indonesia in 1967; he could have traveled under an Indonesian passport, issued following his adoption by his Indonesian stepfather; and it is conceivable that, if he was, in fact, born in Kenya in 1961, he could still have been a British subject, traveling with a British passport. So which is it?"

It's obvious that established facts mean nothing when your goal is to destroy someone. Let's take the possibilities Hollah describes. The "Indonesian passport". Obama could not have traveled under an Indonesian passport because he was NEVER adopted by his stepfather and nobody has ever shown a shred of evidence that he was. Obama's stepfather had no authority over Obama as a child at the time because he was not the biological father and there has been no evidence as to prove that Obama was adopted by his indonesian father -- period.

Furthermore in Indonesia during that time children of foreign indonesian marriages, especially mixed marriages had to reside in Indonesia for 5 years or had to be 5 years of age to be able to gain citizenship and to be legally adopted by his indonesian step father. Because he only came to indonesia at 6 years and left at 10 years none of this applied.

In addition Obama would have had to give up his US natural born citizenship to become an Indonesian and then to officially, in the eyes of the law, attend school. He could not give up his citizenship as he was too young. What was written on the school documents were not legal in the eyes of indonesia or US law. Soetoro had no legal right to proclaim Obama anything and probably broke the law to get Obama into school. END OF THAT POSSIBLE SCENARIO.

Next scenario: Obama traveled under a British passport due to his birth in Kenya.
IMPOSSIBLE.   His mother was never in Kenya. There is no proof that she was ever there.  Even the Kenya government was unable to find any evidence that she was, and to try to say she was given the circumstances at the time is downright ridiculous. Once again, his mother was living in Hawaii in 1961 with her parents. Her "husband" (actually her marriage to Obama Sr. was probably illegal since he was already married with a couple of children) was in Kenya in 1960, but not again until 1965. So in order for us to believe Obama was born in Kenya, we would have to believe that a pregnant 18-year-old white girl from Kansas, left the comfort of her parents' home when she was 8 months pregnant to travel to war-torn Kenya which was still suffering from the ravages of the Mau Mau uprising WITHOUT HER HUSBAND, just to give birth and then travel back to Hawaii to quickly report his birth to the Honolulu Advertiser to meet the definition of Natural Born Citizen so that some day he could be eligible to run for President. Even the most dedicated stoner wouldn't believe this one. Obama-haters on the other hand orgasmically swoon at the "possibility".
HOLLAH'S CONCLUSION IN HIS OWN WORDS:

"Conclusion: When Obama went to Pakistan in 1981 he was traveling either with a British passport or an Indonesian passport.   If he was traveling with a British passport that would provide proof that he was born in Kenya on August 4, 1961, not in Hawaii as he claims.  (DISPROVEN)
And if he was traveling with an Indonesian passport that would tend to prove that he relinquished whatever previous citizenship he held, British or American, prior to being adopted by his Indonesian step-father in 1967.(DISPROVEN)
Whatever the truth of the matter, the American people need to know how he managed to become a “natural born” American citizen between 1981 and 2008. Given the destructive nature of his plans for America, as illustrated by his speech before Congress and the disastrous spending plan he has presented to Congress, the sooner we learn the truth of all this, the better.  Is he a “natural born” citizen, or isn’t he? It seems pretty clear from the available evidence that he is not. If that proves to be the case he should minimize the damage to the country and follow the Nixon example; he should simply resign from office so that we can begin to clean up the mess he leaves behind."

HOLLAH MISREPRESENTS THE FACTS AND IS PROVEN WRONG!

Hollah continues: "So it is well established that Obama did travel to Indonesia and Pakistan in 1981. What is not established, and what is critically important, is what passport he used during that trip. There are only three possibilities: Obama could have traveled under a U.S. passport… a passport first issued when he and his mother moved from Hawaii to Indonesia in 1967; he could have traveled under an Indonesian passport, issued following his adoption by his Indonesian stepfather; and it is conceivable that, if he was, in fact, born in Kenya in 1961, he could still have been a British subject, traveling with a British passport. So which is it?" WE HAVE DISPROVEN THE INDONESIAN OR BRITISH (KENYAN) PASSPORT THEORY. LET'S MOVE ON:

"Unfortunately for Obama, in the present circumstance, Pakistan was under martial law in 1981 and certain undesirables… Christians, Jews, and Americans… were prohibited from entering the country. Pakistan was on the U.S. State Department’s “no travel” list..."

This is where Hollah's whole theory goes where it belongs . . . right down the toilet. This clown apparently read on some right-wing blog about this so-called fact that Americans were banned from travel to Pakistan in 1981. AMERICANS WERE NOT BANNED FROM TRAVEL TO PAKISTAN IN 1981. Instead of joining the ranks of the egotistical jerks who repeatedly bring this false claim against Obama he could have easily researched this subject as THE CANDID BLOGGER has done. Here are the facts:

I found this article in a 1981 edition of the New York Times. Read it an weap, Mr. Hollah, and take this information with you back to the other Obama-haters who should be sanctioned at the very least. For your enjoyment:

The U.S. State Department Travel Advisory to Pakistan in 1981 confirms the newspaper account:

BEFORE TRAVELING TO PAKISTAN, AMERICAN CITIZENS SHOULD BE AWARE OF THE FOLLO[WING] UPDATED VISA REQUIREMENTS: 30 DAY VISAS ARE AVAILABLE AT PAKISTANI AIRPORTS [FOR] TOURISTS ONLY. AS THESE VISAS ARE RARELY EXTENDED BEYOND THE 30 DAY TIME PER[IOD,] TOURISTS PLANNING TO STAY LONGER SHOULD SECURE VISAS BEFORE COMING TO PAKIS[TAN.] ANY TRAVELER COMING INTO PAKISTAN OVERLAND FROM INDIA MUST REPEAT MUST HA[VE A] VALID VISA, AS 30 DAY VISAS ARE NOT REPEAT NOT ISSUED AT THE OVERLAND BOR[DER] CROSSING POINT AT WAGHA.

ANY NON-OFFICIAL AMERICAN WHO IS IN PAKISTAN FOR MORE THAN 30 DAYS MUST REGIS[TER] WITH THE GOVERNMENT’S FOREIGNER REGISTRATION OFFICE. EXIT PERMITS ARE REQUI[RED] FOR THOSE WHO HAVE STAYED LONGER THAN 30 DAYS BEFORE THEY ARE ALLOWED TO LE[AVE T]HE COUNTRY. ALL AMERICANS TRAVELING TO PAKISTAN ON OFFICIAL BUSINESS OR [FOR] PRIVATE EMPLOYMENT ARE REQUIRED TO HAVE A VISA BEFORE ARRIVAL, AND, AS [THE] GOVERNMENT OF PAKISTAN’S CLEARANCE PROCESS IS OFTEN QUITE LENGTHY, WE WOULD URGE TH[OSE] COMING TO APPLY AT THE NEAREST PAKISTANI EMBASSY OR CONSULATE AS FAR IN ADVA[NCE] OF THEIR SCHEDULED ARRIVAL AS POSSIBLE.