Please Tell the Republicans to Just SHUT UP 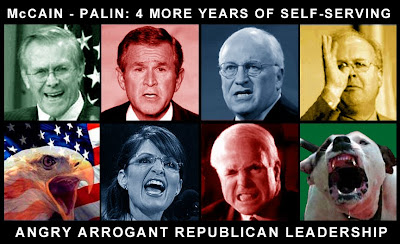 The Faces of Dissent in America
When the Bush administration came to power, we were facing budget surpluses so large that we were within paying off the entire deficit in about 10 years. Budget surplus projections went far into the future. Bush immediately cut taxes and gave the money to his base and his donors, increased spending by massive amounts, and started a war based upon lies that was and still is funded entirely with borrowed money. He intentionally left our borders unprotected and encouraged corporations to outsource their high paying jobs through tax incentives. He cut taxes during time of war (something no President has ever done) and did everything he could to eliminate the middle class and achieve the goal of his grandfather Prescott that was to establish a global economy by making the U.S. the equivalent of a third world country. He was wildly successful.

In my opinion, it was a calculated decision to bankrupt the economy and to destroy the very social programs that President Obama is trying so hard to grow. The banking fiasco has it's roots in the deregulation craze of the overrated and overhyped Reagan Administration, then took off under George W. Bush. To blame the current administration for this mess is not only unbelievable, but disingenuous and untrue. American taxpayers became part owners of the banking system in the last months of the Bush administration---BEFORE Obama had ever made a decision--and now these Republican so-called patriots are calling Obama's proposal to get us out of this mess "Socialist". The mess is real, the deficit of the last 8 years tragic, and the challenges before our new President are enormous.

To deal with our economy, two wars, failing education, healthcare, an energy system that is bound to fail without real change, a job market that claims 12% unemployment but that all knowledgeable people realize may well be double that if the government would ever get around to counting those whose benefits have run out, will take someone who has an enormous ability to multi-task, a word that is foreign to Republicans who for eight years, followed their single syllable President like sheep, a man who was unable to think and chew gum at the same time; a man who embarrassed this country at home and abroad with his stupidity and lack of grace.

You guys know who you are. You are Rush "Oxycontin" Limbaugh, the hypocritical radio personality with an ego the size of Jupiter and a heart that has yet to be discovered. This glorified disc jockey has told his fervent Republican followers that he "wants Obama to fail", yet he tries to color his hate-filled words with a desire to improve this country. B.S., Rush. You want to improve your ratings, period.

Then there is the Emperor of Evil, John Boehner, who sports a voting record just to the right of Attila the Hun and whose glare and negative persona reveal a walking, talking right wing Zombie.

Finally, there is the Ancient One, John McCain, the losing candidate for the Presidency who demonstrated his standing of 894 from a class of 899, by running a comical campaign and his decision making abilities by selecting the worldly Sarah the Mayor, and insisting that "the principles of our economy are strong".

The American people can be thankful for one thing. The Republican Party has earned its way into obscurity and with "leaders" like these, will soon be there.

In President Obama we have a man capable of handling many important issues at once. If there was only one or two critical problems to deal with it would be different, but with the war, economy, jobs, education, healthcare, energy, etc., as all problems that MUST be handled effectively immediately, he is the answer to the prayers of America. He explained it through his press secretary this way:

If your house is on fire, all the rooms are important. Do you just save the living room and perhaps the kitchen? That seems to be the Republican plan. They are scared to death to act. Obama instead intends to gather all his forces and attack the fire all at once in an attempt to save the entire house, or NATION.

As the greatest drug dealer of all time once said: "READ MY LIPS". To all Republicans. If you can't participate as co-partners in this effort to restore America's greatness, then SHUT UP and stay the hell out of his way. Your type of patriotism makes me sick.