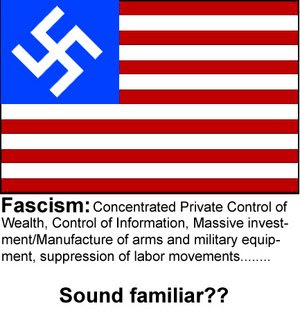 Bush Family Dreams Almost Realized
Legal expert Michael Ratner calls the legal arguments made in the infamous Yoo memos, "Fuhrer's law." We know from the archives that Grandpa Prescott Bush planned the assassination of FDR in 1931 in order to overthrow the government and install a fascist regime in America. This was confirmed by American journalist John Buchanan and British journalist, Duncan Campbell. Only the heroic efforts of General Smedley Butler prevented this from happening.

Now we have learned more since the memos of George W. Bush's legal counsel, John Yoo, lay the legal groundwork for the president to send the military to wage war against U.S. citizens; take them from their homes to Navy brigs without trial and keep them forever; close down the First Amendment; and invade whatever country he chooses without regard to any treaty or objection by Congress.

What Yoo says is that the president's authority as commander in chief in the so-called war on terror is not bound by any law passed by Congress, any treaty, or the protections of free speech, due process and the right to be free from unreasonable searches and seizures. The First, Fourth and Fifth amendments -- gone.

What this actually means is that the president can order the military to operate in the U.S. and to operate without constitutional restrictions. They -- the military -- can pick you or me up in the U.S. for any reason and without any legal process. They would not have any restrictions on entering your house to search it, or to seize you. They can put you into a brig without any due process or going to court. (That's the Fourth and Fifth amendments.)

The military can disregard the Posse Comitatus law, which restricts the military from acting as police in the the United States. And the president can, in the name of wartime restrictions, limit free speech. There it is in black and white: we are looking at one-person rule without any checks and balances -- a lawless state. Law by fiat.

That was the America that was planned by George W. Bush and the Republican Party. The next time you hear John Boehner, or John McCain, or any of the other empty suits that represent the Republican Party, attack the Obama administration, just remember how close we came in this country to realizing the dream of Prescott Bush -- a fascist America.