Is Wal-Mart Good for America? 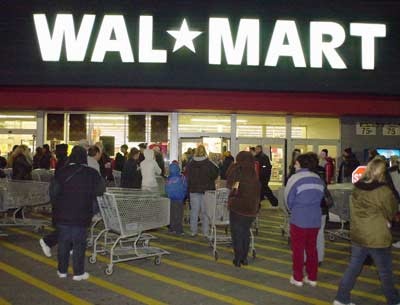 Good or Bad?
There is a lot of controversy about Wal-Mart in America. One thing we do know, if you want goods made in China, Wal-Mart is for you. Here are some more things we know about Wal-Mart:

HOW BIG IS WALMART?

3. Wal-Mart will sell more from January 1 to St.Patrick's Day (March 17th) than Target sells all year.

5. Wal-Mart employs 1.6 million people and is the largest private employer. And most can't speak English

6. Wal-Mart is the largest company in the history of the World.

7. Wal-Mart now sells more food than Kroger & Safeway combined, and keep in mind they did this in only 15 years.

8. During this same period, 31 Supermarket chains sought bankruptcy (including Winn-Dixie).

9. Wal-Mart now sells more food than any other store in the world.

Maybe Wal-Mart should bail out Wall Street.
WHAT THE MEDIA HAS NOT TOLD YOU ABOUT WAL-MART

Starting in 1958, Sherman Skolnick was a Chicago court reformer. Since 1963, he was founder/chairman, Citizen's Committee to Clean Up the Courts, disclosing certain instances of judicial and other bribery and political murders. Mr. Skolnick has passed away on May 22, 2006, but his work lives on.

"In its simplest terms, Wal-Mart is a front for the Rockefellers and the Red Chinese Secret Police. Do not the top honchos at Wal-Mart know that their cheap prices are based on production by Chinese slave labor, in camps and factories operated by the Secret Police? By the way, there has been a movement in the U.S. to pay reparations to the descendents of American slavery. Will there some day be a similar movement in mainland China, to compensate the families and descendents of slave laborers?
Items that other stores sell for twenty dollars are sold by Wal-Mart for ten dollars. And Wal-Mart reportedly pays only twenty cents for the item made by slave labor. There is very little about the period of the 1980s as to Wal-Mart, when the Rockefellers were installing the Chinese in Arkansas and in American business. Who was noticing when the Rockefellers were playing their China card?"

"When you know the facts, you would understand why we designate the new airport in Northwest Arkansas, as China's Airport on U.S. soil. Look at a map of the area. Right nearby, in Bentonville, is the headquarters of Wal-Mart Stores, Inc., Sam's Club, and other subsidiaries. As stated in Part One, Wal-Mart reportedly depends on goods from Red China made by slave laborers under the authority of the Secret Police. Also right nearby in Springdale, Arkansas, is the headquarters of Tyson Foods, Inc., also called by some as Tyson Chickens. They dominate the U.S. chicken market and Tyson exports to more than 70 countries. As stated earlier, Tyson has reportedly been financed in part by dope trafficking. Was their visit to Red China to share chicken processing "expertise" or to reportedly make further arrangements for exports to the U.S. from Southwest China of "China White", high purity dope? "

Report #3 - (click to read)"The second section of the Rockefeller scheme is to re-locate all or a substantial portion of Wal-Mart's headquarters to Chicago. Tyson has already set up in Chicago a major food processing plant that reportedly employs a large number of non-citizen Mexicans more or less induced to infiltrate the U.S. Such workers are subject to being cowed by the Immigration and Naturalization Service, INS. And such labor is preferred to local labor which likes to be unionized and receive numerous fringe benefits. After all, Chicago has traditionally been a trade union town.

To make this all work, Wal-Mart needs an arbitrary and corrupt federal judiciary, cowardly lawyers, and a venal see-nothing press who are more like stenographers of official government lies rather than like inquiring reporters. Big corporations prefer to litigate in Chicago's Federal courts. Why? As one blunt observer aptly stated, "Chicago has the cheapest judicial whores in the nation".