Phoenix Police Raid Home of Blogger Who Criticized Them 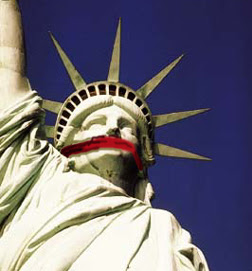 In what should send a frightening chill down the spine of every blogger, writer, journalist and First Amendment advocate in the United States, Phoenix police raided the home of a blogger who has been highly critical of the department. Jeff Pataky, who runs Bad Phoenix Cops, said the officers confiscated three computers, routers, modems, hard drives, memory cards and everything necessary to continue blogging. The 41-year-old software engineer said they also confiscated numerous personal files and documents relating to a pending lawsuit he has against the department alleging harassment - which he says makes it obvious the raid was an act of retaliation.

Police officers accused of drunken driving. A female officer's alleged promiscuity and infidelity. A commander whose critics labeled his son a child molester. Jeff Pataky said he uses negative complaints and anonymous tips such as these to fuel his blogging crusade against Phoenix police. A headline on his Web site suggests rewards would be provided for "dirt" on police indiscretions.

Pataky, a former software sales and marketing executive who now focuses his energy shoveling content on www.badphoenixcops.com, said he believes his online criticism of the department - along with past criticisms of police investigations - led officers to serve a search warrant at his home last week. Police officials said Wednesday that a Phoenix detective prompted the investigation after complaining about harassment, though they declined further comment.

Pataky said he felt the investigation was a response to a lawsuit he filed on Monday in U.S. District Court saying he was maliciously prosecuted by police in 2007 after his ex-wife accused him of harassment, a case later dropped. In his lawsuit he's asking for an unspecified amount for damages. City officials declined to comment on pending litigation.

Pataky's blog is known in law-enforcement circles for its off-color language that, according to the blogger, is aimed at Phoenix Police Chief Jack Harris, Maricopa County Andrew Thomas and other public officials. "Too bad. They need to get over it," Pataky said. "They are held to a higher accountability."

Pataky said he edits the blog and works with four or five people who receive tips from a variety of sources, including sworn and retired officers. Investigators confiscated computer material and other items from Pataky's north Phoenix home, which he considered a threat to quit writing.

"We have heard internally from our police sources that they purposefully did this to stop me," Pataky said. "They took my cable modem and wireless router. Anyone worth their salt knows nothing is stored in the cable modem."

Maricopa County Judge Gary Donahoe signed the search warrant that allowed at least ten cops to raid his home in North Phoenix on March 12 while handcuffing his female roommate for three hours as they tore the place apart. Pataky, who was out of town on a business trip during the raid, also believes police were retaliating against him for the content of his blog, much of it which comes from inside sources within the department.

“They broke into my safe and took the backups of my backups,” he said in a phone interview with Photography is Not a Crime on Wednesday. “I can’t even file my taxes because all my business plans are gone. They took everything.”

The search warrant lists “petty theft” and “computer tampering with the intent to harass” as probable causes. He has yet to see an actual affidavit that lists in detail the probable cause and is skeptical that one even exists.

Perhaps a Federal investigation relating to freedom of speech and civil rights is in order.