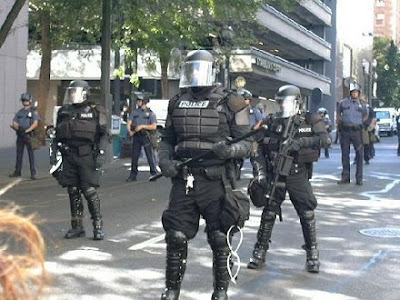 Recently there has been much rumbling about FEMA camps being readied around the Nation to house a civilian population in the event of "turmoil" or "unrest" due to either a natural disaster or, more likely, civilian unrest due to an economic collapse. Now we see that the rumors have a basis in reality.  Click on the link to download your own copy of the 34 page pdf. entitled CIVILIAN INMATE LABOR PROGRAM.

There over 800 prison camps in the United States, all fully operational and ready to receive prisoners. They are all staffed and even surrounded by full-time guards, but they are all empty. These camps are to be operated by FEMA (Federal Emergency Management Agency) should Martial Law need to be implemented in the United States and all it would take is a presidential
signature on a proclamation and the attorney general's signature on a warrant to which a list of names is attached.

Some of the scarier items include:

Distribution. This publication is available in electronic media only and is intended for command levels A, B, C, D, and E for the Active Army, Army National Guard of the United States, and the U.S. Army Reserve.

a. Civilian inmate labor programs benefit both the Army and corrections systems by—

(1) Providing a source of labor at no direct labor cost to Army installations to accomplish tasks that would not be possible otherwise due to the manning and funding constraints under which the Army operates.

(2) Providing meaningful work for inmates and, in some cases, additional space to alleviate overcrowding in nearby corrections facilities.

(3) Making cost–effective use of buildings and land not otherwise being used.

(1) Establishing a comprehensive lease agreement, interservice, interagency, and/or interdepartmental support agreement (ISA), and/or memoranda of agreement with the corrections facility.

(4) Training all installation personnel involved in the operation or administration of the program frequently.

(5) Developing a public affairs plan informing the installation and the surrounding local community of the program and work projects assigned to civilian inmate labor.

whether the report had local, regional, or national coverage. Provide copies of the article and/or script, if available.

c. The Chief of Public Affairs will—

(2) Coordinate all proposed media coverage of potential national interest concerning the Army Civilian Inmate Labor Program and civilian inmate prison camps with the Assistant Chief of Staff for Installation Management(ACSIM) prior to release.

HOW CAN THEY DO THIS?

Executive Orders associated with FEMA that would suspend the Constitution and the Bill of Rights. These Executive Orders have been on record for nearly 30 years and could be enacted by the stroke of a Presidential pen:

EXECUTIVE ORDER 10990  allows the government to take over all modes of transportation and control of highways and seaports.

EXECUTIVE ORDER 10995 allows the government to seize and control the communication media.

EXECUTIVE ORDER 10997 allows the government to take over all electrical power, gas, petroleum, fuels and minerals.

EXECUTIVE ORDER 10998  allows the government to seize all means of transportation, including personal cars, trucks or vehicles of any kind and total control over all highways, seaports, and waterways.

EXECUTIVE ORDER 10999 allows the government to take over all food resources and farms.

EXECUTIVE ORDER 11001 allows the government to take over all health, education and welfare functions.

EXECUTIVE ORDER 11002 designates the Postmaster General to operate a national registration of all persons.

EXECUTIVE ORDER 11003 allows the government to take over all airports and aircraft, including commercial aircraft.

EXECUTIVE ORDER 11051 specifies the responsibility of the Office of Emergency Planning and gives authorization to put all Executive Orders into effect in times of increased international tensions and economic or financial crisis.

EXECUTIVE ORDER 11310 grants authority to the Department of Justice to enforce the plans set out in Executive Orders, to institute industrial support, to establish judicial and legislative liaison, to control all aliens, to operate penal and correctional institutions, and to advise and assist the President.

EXECUTIVE ORDER 11921 allows the Federal Emergency Preparedness Agency to develop plans to establish control over the mechanisms of production and distribution, of energy sources, wages, salaries, credit and the flow of money in U.S. financial institution in any undefined national emergency. It also provides that when a state of emergency is declared by the President, Congress cannot review the action for six months. The Federal Emergency Management Agency has broad powers in every aspect of the nation. General Frank Salzedo, chief of FEMA's Civil Security Division stated in a 1983 conference that he saw FEMA's role as a "new frontier in the protection of individual and governmental leaders from assassination, and of civil and military installations from sabotage and/or attack, as well as prevention of dissident groups from gaining access to U.S. opinion, or a global audience in times of crisis."